Some news from PayPal that slipped fairly under the radar this week is that the company opened its Mobile Payments Library to developers. A representative for PayPal tells WebProNews it will give developers an "easy way to get payments from within their apps." 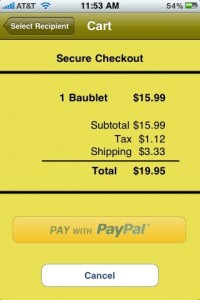 A few developers have already started using the library. Examples include ShopSavvy, and Shutterfly’s Wink. Baublet is the first one in the app store to utilize it.

"Being a first time developer, PayPal’s quick and responsive help has been fantastic and made this task pretty darn easy," says Baublet developer Michael Robinson. "Our goal was to have the ability to create, purchase and mail a charm within a few minutes on our app. The PayPal’s Mobile Payments was critical to that success."

The library currently supports iPhone and iPad apps, but will become available for other platforms soon.