Pandora Internet Radio has, at some point, helped most curious music lovers discover something completely new. For me, years ago, my Blitzen Trapper channel led me to Agalloch. I guess it’s the Portland thing.

Those of you familiar with the two bands will get the joke. Those of you who aren’t, don’t feel left out – the joke sucks.

But in all seriousness, Pandora’s like-recommendation engine has kept many a listener from recycling all the old stuff that they’re comfortable with. And now, Pandora is announcing that they are adding comedy to their personalized channel options.

11 hours ago via Twitter for Android · powered by @socialditto

Now available for your listening pleasure are over 10,000 clips from more than 700 comedians – with more being added as we speak. Adding comedy to the personalized channel mix had to be a long, but sometimes enjoyable process for the folks at Pandora. Here’s what they have to say about it on the Pandora blog:

Adding comedians to the mix has been one of the top requests from our listeners, so we’ve taken the same approach to comedy as we have to music: carefully and deliberately analyzing comedic “bits” across a very large number of attributes to capture the style, delivery and content of each performance. It’s been a very fun experience, taking what we’ve learned in music and applying it to a whole new category. Now, instead of talking about “minor keys,” “falsetto,” and “extensive vamping,” our comedy-analysts capture “odd juxtaposition” (A horse walks into a bar…), “misdirection” and “spoonerisms” (a well-boiled icicle, instead of a well-oiled bicycle)… 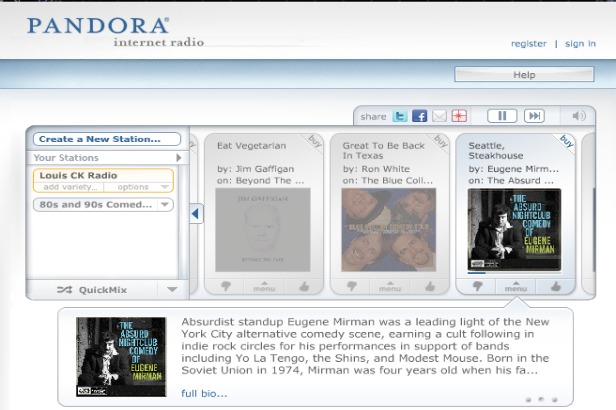 So, just like music, listeners can pick a starting point whether that be a specific comedian, genre, or specific joke. Young comedians will be linked to old greats like Cosby, Carlin and Pryor. It could really help young comedy lovers discover the people who influenced their current favorites.

Plus, this might in fact be the greatest thing to ever happen to road trips in the history of ever.

“It’ll be interesting when I find out who I’m paired up with,” said comedian Adam Carolla, whose material will be included in the service to the NYT. “I’m sure at some point someone will be insulted. There may be a lot of unintended comedy.”

The only shocking thing for me so far is that they were able to create a set of comedy “like” Louis C.K. – since he is the funniest person on the face of the planet. Since there aren’t multiple funniest persons on the planet, this seems odd to me. Go check him out now.

Radiohead to Perform King of Limbs on TV

May 4, 2011
Recent Posts
Registration is disabled.