In the second quarter of 2010 Trojans accounted for nearly 52 percent of malware, according to a new quarterly report from PandaLabs.

Traditional viruses have their comeback since the start of 2010, now accounting for nearly 25 percent of all malware compared to 15 percent in Q1.  PandaLabs says the increase is due in part to a small handful of hybrid viruses that are replicating themselves at high rates. 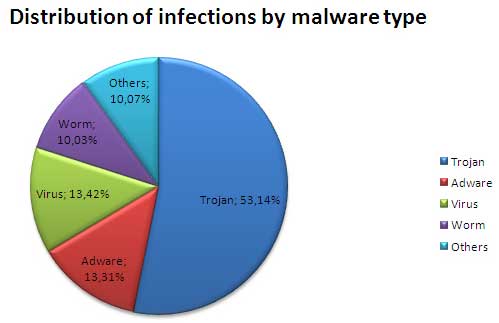 "The increase of viruses can be attributed to the hybridization of threats today," said Sean-Paul Correll, threat researcher at PandaLabs.

"Today’s threats are blending traditional virus capabilities, with Trojan, and sometimes worm-like features. We’re moving from the world of ‘virus’ and ‘Trojan’ to the all encompassing term of ‘malware.’"

Taiwan remained in the top spot for infection rankings by country, with more than 50 percent of all computers infected, followed by Russia and Turkey.

Additional findings in the report include a new phishing technique called Tabnabbing that appeared in May. Tabnabbing exploits the tab browsing system in browsers to make users believe they are on a familiar Web page such as Gmail, Hotmail, Facebook and then steals their passwords.

Tabnabbing uses a JavaScript command that detects when users are not viewing a page they have previously opened, and automatically rewrites the content of the page, as well as the icon and title, spoofing the appearance of the original page. While the extent of Tabnabbing is still unclear, PandaLabs advises users to close all pages that they are not actively using to avoid this threat.

HP's Acquisition of Palm is Complete