The evolution of gaming has taken interesting turns in its relatively short history. We’ve gone from arcade machines, to home consoles, with the latest breakthrough being downloadable gaming content. OnLive, is a gaming service which looks to be pushing the boundaries yet again; with cloud gaming.

Will OnLive be a successful venture? tell us

The OnLive service was announced at the Game Developers Conference last year, and since there has been wide speculation as to how successful they’ll be with their plans. This week, we go from speculation to finally seeing the service in action. Before getting into the details, you might be curious as to how the service works.

OnLive works the same way as cloud storage does for accessing files. Games are hosted on a server and players access content through these servers. Let’s say you wanted to play the game: Batman Arkham Asylum. Instead of going to a store to buy the disc, or download it, OnLive will allow you to simply click on a link and have the game loaded instantly. Batman: Arkham Asylum will then pop up on your screen and you’re on your way.

Game saves will be hosted through these servers as well, so when you’re done playing a game you can pick up right where you left off. All with a simple click. 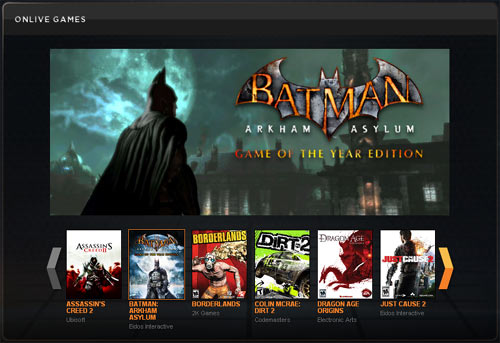 With the synopsis I provided above, you’d think OnLive would be a successful venture. The problem is everything I’ve explained has been simple theory. The question now remains; how will it work in practice?

Luckily, this week we get to find out as the service has officially launched. You can signup for the ‘Founding Members Program‘ which provides your 1st year free, with a $4.95/month charge for the second year. When they say "free", it means you have access to demos, community features, ‘friending’, chat, and spectating. Actual gameplay will require a separate purchase.

This separate purchase is called a ‘PlayPass’. Each game will have its own PlayPass, so to play Batman Arkham Asylum you’ll need to purchase its PlayPass. You can purchase a Full Playpass, which provides unlimited access throughout the game’s lifetime on the OnLive service. You can also choose to ‘rent’ the game for three or five days. OnLive has guaranteed games on the service will be supported for at least three years.

As of now you can connect to OnLive using a PC or Mac. They’re developing a MicroConsole TV Adapter to bring their service to the living room. No release date has been announced as of yet.

Obviously, OnLive is pushing the boundaries of gaming to places never attempted. The problem being, it might be ahead of its time. Streaming a game through a server to players’ broadband connection is a strain which could cause all sorts of lag. Potentially causing a game to be unplayable.

"Despite the enormous potential of OnLive technology, it is important to emphasize that the OnLive Game Service is a very different way to experience videogames. We are using the Internet and computers in ways that have never been tried before and, like any brand new technology, you can expect a few bumps on take off until we reach cruising altitude and achieve a smooth flight. OnLive has been tested in an enormous variety of locations using a vast number of combinations of computers, ISPs, displays and input devices. Even so, there are endless possible combinations. So while most OnLive testers report good results with their gameplay experience, we still run into situations where the user may have to take some action (e.g. reset a cable modem or use a different mouse), or unique situations that we have not yet accounted for and require further changes to OnLive technology. "

The success of the service will really boil down to two things; the frequency of lag or other technical problems, and price. They’ve announced the monthly free will be $4.95 a month to simply access OnLive (with the Founding Member Discount, anyway). What they haven’t provided is how much the PlayPasses for the various games will cost. If they set the price points too high, then you’re charging people a monthly fee along with another charge which might be too great for players to handle.

The evolution of gaming has been started by lofty ideas, and goals much like OnLive is presenting. The potential of the service is too great to ignore, but so are the foreseeable problems along with it. Whatever happens, cloud gaming is certainly something to keep an eye on.