In the 3 days after the Super Bowl was broadcast, the top 10 ads have earned a total of over $1 million in impressions via online video, according to a new report from Kantar Video.

Volkswagen’s “The Force” ad was the most popular, earning the brand $538,000 due to its successful viral strategy by launch a week before the Super Bowl and attracting heavy media coverage. 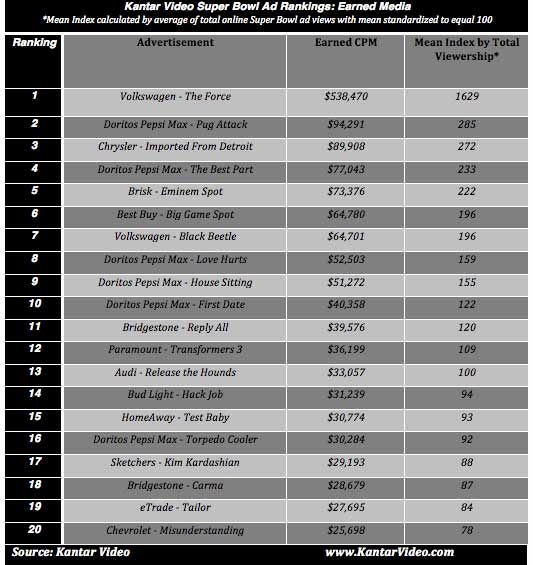 *The Movie Trailer category generated the most online views per video on average followed by Automotive.

*Ads placed in the Second Quarter captured more online viewing attention than other positions, while halftime slots produced the fewest.

*An average of 32.5 separate versions of the ads were found uploaded by viewers, contributing to greater total viewership and social activity.

“As a result of increased access to the creative through online video, social platforms, and buzz generating strategies, this year’s Super Bowl Ads are among the most viewed and most discussed advertisements in history,” said Andrew Latzman, SVP Research for Kantar Video.

“And, while people can pre-occupy themselves with what types of executions garnered the best results, what is clear is that there are ways for brands to capitalize on the complementary relationship between online video and TV.”

Does Sony Want to Leave iTunes?