This week’s big TV event was unquestionably the season premiere of "Lost"; lots of people have, over the course of the previous five or so years, become huge fans of the show.  But new stats imply that very few of them sat in front of computer monitors on Wednesday, rather than televisions on Tuesday, in order to watch the two-hour episode.

Nielsen took a look at why people watch online TV, and the leading reason doesn’t have much to do with convenience or fewer commercials.  Instead, 54 percent of people simply watch TV online because they forgot to catch an episode as it aired.  And the next-most common reason, with 47 percent of people citing it, is similar: because they missed a large number of episodes. 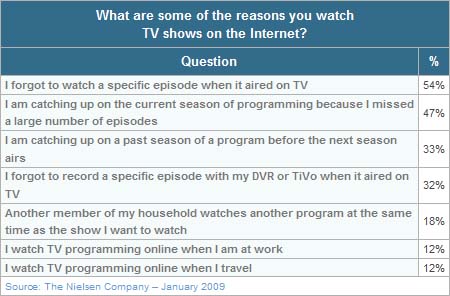 It’s not until you get down to the least popular reasons ("Another member of my household watches another program at the same time," "I watch TV programming online when I am at work," and "I watch TV programming online when I travel") that online TV sort of distinguishes itself.  Otherwise, it appears to act as more of a memory aid (or way to avoid buying DVDs) than anything.

The details relating to how people watch TV online also make the activity look like less than an integral part of everyday life.  Jon Gibs, Nielsen’s Vice President for Insights, Online and Cross Media, noted, "When we go online to watch TV shows, that activity dominates that particular online session," and "the viewing of TV shows online proves to be a rather solitary activity."

This all makes for less than fantastic news for Hulu and YouTube.  Of course, we have to note that neither site is exactly starving for page views, regardless of people’s reasons for visiting them.