U.S. online retail spending reached a record $43.4 billion in the fourth quarter of 2010, an increase of 11 percent over a year ago, according to a new report from comScore.

This growth rate is the fifth consecutive quarter of positive year-over-year growth and second quarter of double-digit growth rates in the past year. 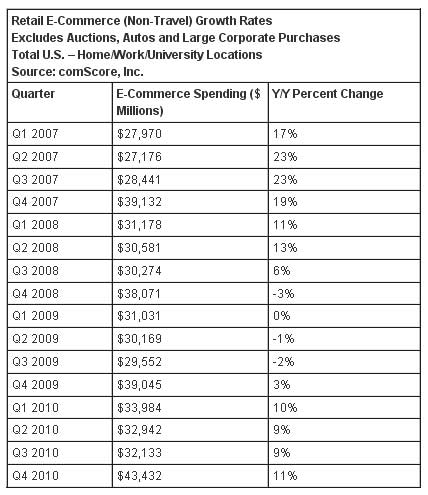 “Retail e-commerce had a strong fourth quarter, growing 11 percent versus last year as holiday season spending was bolstered by an improving sentiment among some consumer segments and by retailers’ discounting and promotions,” said comScore chairman Gian Fulgoni.

“The 2010 holiday season saw the first billion-dollar day on record and several more surpassing $900 million to help propel Q4 to record spending levels. We anticipate that the progress we’ve seen in the past year as we climbed out of the recession will continue with sustained double-digit growth rates in 2011.”

*84 percent of U.S. Internet users conducted an online transaction in Q4 2010, up from 78 percent last year. The average buyer spent about the same amount online during the most recent quarter as they did last year.