Online retail spending in the U.S. in the fourth quarter reached $39 billion, a 3 percent increase compared to a year ago, according to the latest report from comScore.

"The fourth quarter, with a 3 percent year-over-year growth, helped end what has been a disappointing year for online consumer spending on a more positive note," said comScore chairman Gian Fulgoni.

"As we head into 2010, there is reason for guarded optimism for online retail spending to continue to gain share of consumers’ wallets. At the same time, I expect absolute growth to be stymied by continued high unemployment and the deleveraging that is occurring in the economy as consumers exercise their new found propensity to save." 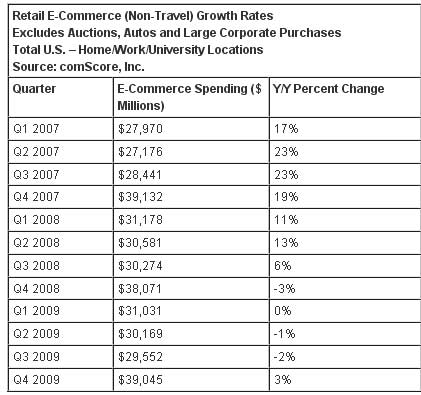 Spending growth was driven by an increase in online buyers, while average spending per buyer saw modest declines.