Online spending for the first 33 days of the November-December 2010 holiday season has reached $16.8 billion, representing a 12 percent increase over the same time period last year, according to the latest report from comScore.

The most recent week saw four individual days surpass $800 million in spending, led by Cyber Monday, which became the heaviest online spending day on record at $1.028 billion. Tuesday, November 30 reached $911 million, making it the third heaviest online spending day on record, while Wednesday ($868 million) and Thursday ($850 million) also reached high levels, although growth rates for the season subsided in the latter half of the week. 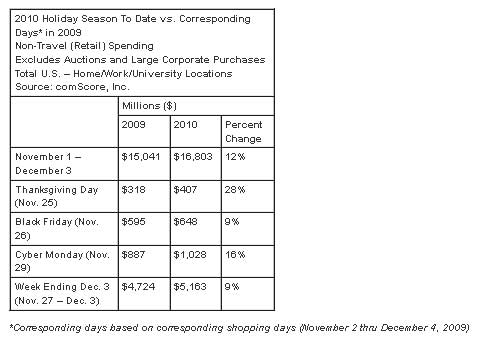 “Cyber Monday kicked off the most recent work week with an all-time record of more than $1 billion in e-commerce spending, representing a strong 16-percent growth rate versus year ago,” said comScore chairman Gian Fulgoni.

“While we saw three more days during the week with at least $800 million in spending, growth rates slowed to single-digit levels following several weeks at about 13 percent. We believe this softening is attributable to retailers’ heavy discounting and promotional activity during the earlier part of the holiday season [through Cyber Monday], which pulled some consumer demand forward, resulting in a mild hangover effect in the days immediately following Cyber Monday. We may see another week of this effect before late season discounts and buying by procrastinators gives the season a final spending surge.”

One trend that has surfaced since the beginning of the recession is the shift of online spending towards larger retailers, who generally have greater financial resources to invest in offering the most competitive pricing on goods and services. Growth for the holiday season to date has come almost entirely from the Top 25 online retailers, who have seen their total dollar sales grow 20 percent while overall growth among the small and mid-sized retailers has been flat.

As part of comScore’s annual holiday shopping survey of consumers, approximately 500 Internet users were asked about the importance of social media sites influencing their purchase decisions. When asked how much they agreed with the statement “Recommendations from friends on social media sites are a great way to get gift ideas during the holiday season,” 33 percent agreed with the statement compared to 24 percent who disagreed (while 43 percent remained neutral). This finding suggests that, while social media can certainly play a role in driving holiday shopping and purchase behavior, it may not be a primary driver for many consumers.

When asked about which specific forms of social media may have helped influenced their purchase decisions this holiday season, consumers indicated that reading a consumer-generated product review (14 percent) and reading an expert product review (10 percent) were the most likely to influence their behavior. Some respondents also indicated that following a fan page on Facebook to learn about deals and promotions (9 percent), a friend’s Facebook status update about a product/service (9 percent) and watching a product-related video (8 percent) influenced their holiday purchases this season.