U.S. online holiday spending has reached $21.95 billion during the first 40 days of the season, an increase of 12 percent over the same time period as last year, according to the latest report from comScore.

The most recent week (week ending Dec. 10) reached $5.15 billion in spending, an increase of 11 percent versus the corresponding week last year, as two individual days each surpassed $900 million. 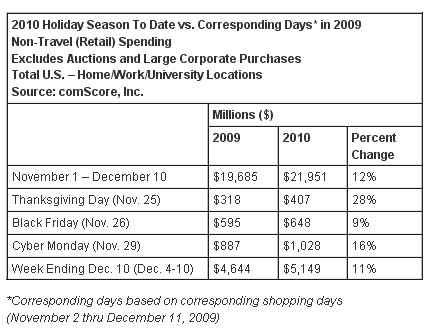 “Growth rates during the most recent week settled in at around 11 percent, which is consistent with our forecasted spending growth rate for the holiday season,” said comScore chairman Gian Fulgoni.

“With more than $5 billion in spending this past week, it’s clear that while deal-seeking shoppers may have driven stronger than anticipated spending early in the season, Americans continue to demonstrate a significantly greater willingness to spend online this year than in seasons past. This coming week, beginning with Green Monday, should see some of the heaviest online shopping activity of the season and we expect at least one more day to surpass the billion dollar spending threshold.” 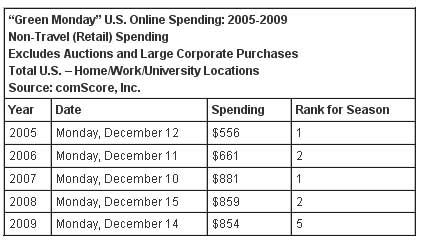 “We anticipate that Green Monday this year will be another strong day for online buying, leading off what will be the heaviest spending week of the season,” added Mr. Fulgoni.

“However, with Free Shipping Day occurring on Friday, December 17, it is likely that buying will get distributed more evenly across the week rather than concentrated so heavily in the early days of the week. As a result, several days in the upcoming week are candidates to the heaviest online spending day of the year. It’s also apparent that as consumers become more confident in the reliability of expedited shipping that they are willing to buy online later in the season.”

Since comScore began tracking ecommerce spending in 2001, it has seen five individual shopping days surpass $900 million in spending. To date, Cyber Monday 2010 (Nov. 29) is the only billion dollar spending day on record, followed by Monday, December 6, 2010 with $943 million and Tuesday, December 15, 2009 with $913 million. Tuesday, Nov. 30, 2010 ($911 million) and Wednesday, Dec. 8, 2010 ($901 million) round out the top five. Of the ten heaviest online spending days on record, most have occurred during the early part of the work week with four occurring on Mondays, three on Tuesdays, and two on Wednesdays.