Online retail spending for the 2010 holiday season reached $32.6 billion, representing  an increase of 12 percent compared to last year and an all-time record, according to the latest report from comScore. 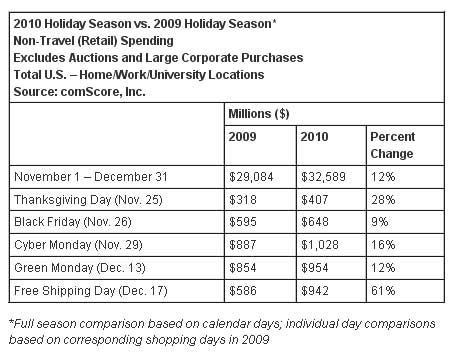 “The 2010 online holiday shopping season was a memorable one in which we saw spending rebound strongly from the recession of 2008 and 2009, and slightly exceed even our early expectations,” said comScore chairman Gian Fulgoni. “We saw spending increase at a rate of 12 percent for the season, outpacing our forecasted 11-percent growth, and set a new holiday season record as total e-commerce spending reached $32.6 billion.”

“This year, retailers targeted many of their promotions even earlier than usual and reaped the benefits. The season will be remembered for an exceptional Cyber Monday, which was the first billion-dollar spending day in history, and the first time we’ve witnessed Cyber Monday rank as the heaviest online spending day of the year. And of course, we cannot forget the impact of free shipping, which was used in more than half of all e-commerce transactions this season, up significantly from last year.” 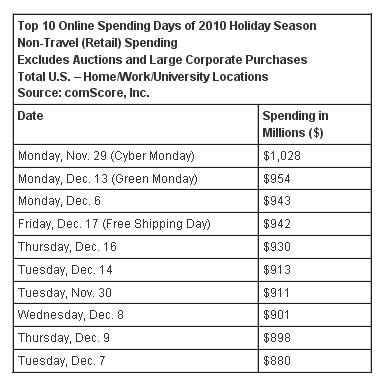 For the first time since comScore began tracking ecommerce activity in 2001, Cyber Monday (Monday, Nov. 29) ranked as the heaviest online spending day of the year at $1.028 billion. It also ranks as the first online spending day on record to surpass the $1 billion spending mark. Green Monday (Monday, Dec. 13) ranked as the second heaviest day at $954 million, followed by Monday, December 6 at $943 million. Free Shipping Day (Friday, Dec. 17) ranked fourth at $942 million, while Thursday, December 16 rounded out the top five with $930 million. Eight days in total surpassed $900 million in spending this holiday season.