Online holiday spending has reached $23.82 billion, representing a 12 percent increase over the same time period last year, according to the latest report from comScore.

The most recent week (week ending Dec. 12) reached $5.31 billion in spending, an increase of 12 percent over the corresponding week last year. Monday, December 13, known as “Green Monday” (the second Monday in December when online spending has historically tended to peak), reached $954 million in spending, representing a 12-percent increase compared to last year. 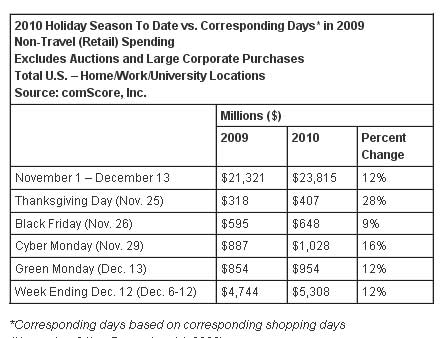 “Green Monday kicks off what we expect will be the heaviest online shopping week of the season right up through ‘Free Shipping Day’ on Friday, December 17. In the past, Green Monday was more reliably the heaviest day of the season, but in recent years we have seen heavy spending days occur even later into the season as consumers continue to gain confidence in retailers and shippers being able to deliver their gifts in time for Christmas.”

As part of the comScore Holiday Shopping Survey, more than 500 people were asked about their holiday shopping for the season so far. More than one-third (35%) said they has already purchased everything they needed this season. 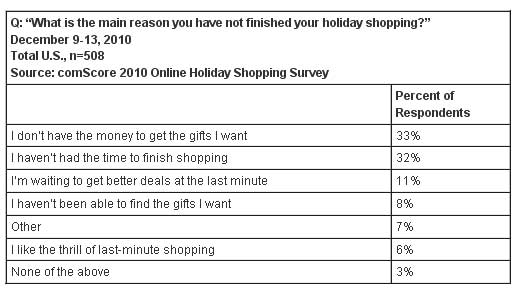 “The reasons consumers give for not having finished their holiday shopping reveal some very important dynamics driving the retail industry today,” added Mr. Fulgoni.

“The first is that we are offered a stark reminder that many consumers are still strapped for cash and may be waiting for their mid-December paychecks before they can finish their shopping. The second important point is that it’s clear consumers have significant time constraints in their lives, which is one of the key drivers behind the continuing shift in retail dollars to the online medium, as the Internet enables people to shop for many gifts quickly and more efficiently, not to mention the cost savings that can be realized through e-commerce.”