Online shoppers  plan to spend more on holiday gifts this year, with 66 percent indicating they will spend over $500, according to a new report  from PriceGrabber.

Last year, more than half (59%) of shoppers spent $500 or more on gifts. This year, the average amount that holiday shoppers plan to spend on gifts is $845.

According to survey data, the average 2010 holiday shopper will make 57 percent of their holiday purchases online, 40 percent in brick-and-mortar stores and 3 percent from a mobile phone. 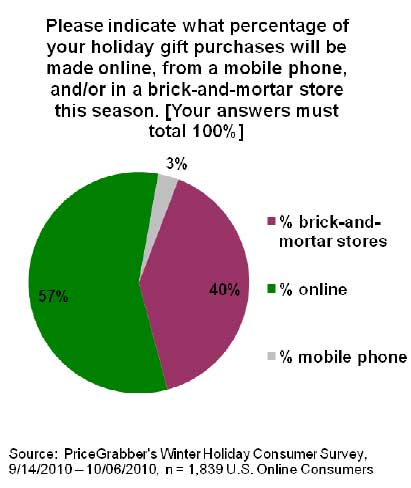 "Shoppers need to evaluate the benefit of monitoring price wars for the lowest price versus potentially missing out on the most popular products of the season."

In PriceGrabber’s holiday survey, consumers were asked which smartphone they would prefer to receive as a gift this holiday season. The Apple iPhone 4 took the lead, with 47 percent of consumers choosing the iPhone 4 over other smartphones. Twenty-two percent of shoppers prefer the Motorola Droid, and 13 percent choose the RIM Blackberry Torch.

Tablet PCs are forecast to be one of the most popular technology gadget gifts this holiday season. The number of searches performed on PriceGrabber for the keyword "tablet" has already more than tripled (330 percent), compared to the same period last year (Oct. 1 to 27, 2009, versus Oct. 1 to 27, 2010). The keyword "tablet pc" has increased in popularity by 76 percent.