Shopper satisfaction with online retailers during the holidays indicates they are more satisfied with prices this year than they were at the same time last year, according to a new report from ForeSee Results.

Customers’ ratings of prices this year (72.1 on the study’s 100-point scale) are more than half a point higher than they were in 2009; though still slightly lower than on Cyber Monday, due to fewer online incentives and specials. Satisfaction with price still remains far below pre-recession levels, which was as high as 75.1 the week of Thanksgiving, 2007. 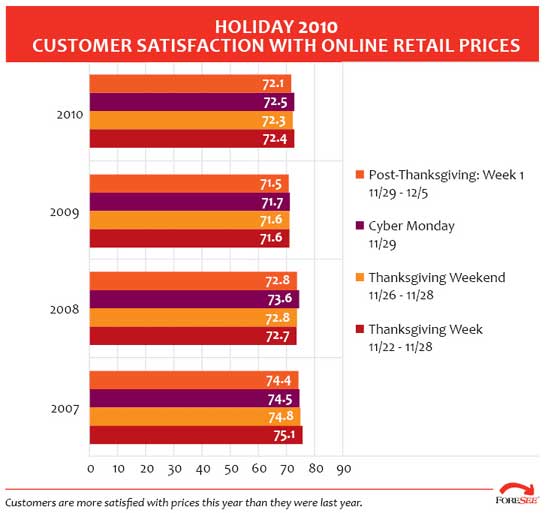 “Analysis of these numbers has to be taken in context said Kevin Ertell, vice president of retail strategy at ForeSee Results.

“Last year, a score of 73.1 was real cause for concern because it was such a drop from the previous year’s score of 75.6. But the struggling economy has changed our definition of success, and the fact that we see scores that are slightly higher than last year is a very good sign.”

As it does nearly every year, online customer satisfaction did take a small dip on Thanksgiving weekend, and is still rebounding.

“It remains to be seen whether that will happen this year, but I have a lot of reasons to be hopeful.”

Wake Up Call to Email Marketers