Online holiday spending for the first 29 days of the season has reached $13.55 billion, representing a 13 percent increase over the same time period last year, according to the latest report from comScore.

Cyber Monday reached $1.028 billion in online spending, up 16 percent versus year ago, representing the heaviest online spending day in history and the first to surpass the billion-dollar threshold. 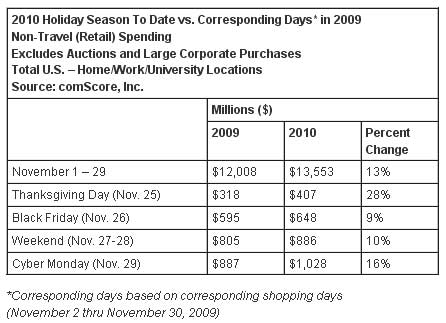 “The online holiday shopping season has clearly gotten off to a very strong start, which is welcome news. At the same time, it’s important to note that some of the early strength in consumer spending is almost certainly the result of retailers’ heavier-than-normal promotional and discounting activity at this early point in the season. So, while we anticipate that there will be more billion-dollar spending days ahead as we get deeper into the season, only time will tell if overall consumer online spending remains at the elevated levels we’ve seen thus far.”

Nearly half of dollars spent online at U.S. Web sites originated from work computers (48.9 percent), representing a decline of 3.8 percentage points from last year. Buying from home comprised the majority of the remaining share (45.4 percent) while buying at U.S. Web sites from international locations accounted for 5.8 percent of sales.

“Since its inception, e-commerce activity has been driven heavily by people making online purchases while at work, an effect that is magnified on Cyber Monday as people return to their desks after the Thanksgiving holiday weekend,” added Mr. Fulgoni.

“While online shopping from work originally occurred to take advantage of broadband speeds that people lacked at home, it was widely believed that this would decline markedly as home broadband connectivity increased. The fact that spending from work remains so prevalent suggests other explanations. It is more likely that consumers continue to shop from work primarily because by doing so they are able to shop for holiday gifts while minimizing the risk that their children, spouses and significant others might see what Santa will bring .”