Customer satisfaction with online banking dropped two points in 2010, from 83 in 2009 to 81 (on a 100-point scale), according to a new study by ForeSee Results and Forbes.

The study found that despite the drop, online banking still faired better than offline banking channels and most other online industries with the score of 80 considered to be the threshold for excellence. 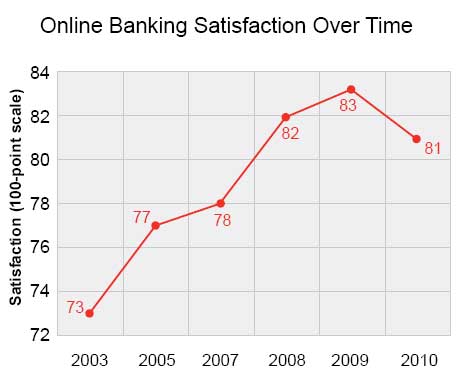 "Despite everything that’s gone on in the financial sector over the past several years, including a stumbling economy, bailouts, and credit freezes, financial institutions have turned to their websites as a way to maintain and even increase customer loyalty," said Larry Freed, president and CEO of ForeSee Results.

"While the dip in score could predict more trouble for the recovery, it also shows that the online channel continues to be the most effective marketing channel for banks and credit unions."

The five largest banks in the country (Bank of America, Citibank, Chase, PNC, and Wells Fargo) scored the lowest in the study, while credit unions tend to have the highest online customer satisfaction scores. However, with all financial institution categories scoring higher than 80, online banking (81) is providing more satisfaction than offline banking (75).

"When it comes to customer satisfaction, big banks, with relatively unlimited resources, are not performing as well as smaller institutions with fewer resources," added Freed.

"While the big companies try to outdo each other with lots of flashy bells and whistles, the small banks have had to keep their focus on satisfying the customer because that’s the only way they can compete. And as the data shows, it’s paid off."