In the first half of 2010, online ad revenues in the U.S. reached $12.1 billion, setting a new half-year record. The total also represented an 11.3% increase over the same period the previous year. It also included the highest second-quarter on record. This is all according to the Interactive Advertising Bureau and  PwC.

"With the strongest first half on record, 2010 has so far indicated that Internet advertising is back, and better than ever," says PwC Assurance partner  David Silverman. "While the recession clearly affected short term growth in 2009, with double digit growth in both search and display during the first six month of 2010, the long term prospects continue to be strong."

"Consumers’ appetite for immersive online experiences is limitless as technological innovation and creativity give rise to new forms of entertainment and information in the digital age," says IAB President and CEO  Randall Rothenberg. "This report highlights marketers’ ongoing adoption of interactive media to build brands—and that’s only going to continue."

Display-related advertising (including banners, rich media, digital video and sponsorships) totaled over $4.4 billion in the first  half of the year. That’s up 16% from the same period in 2009. 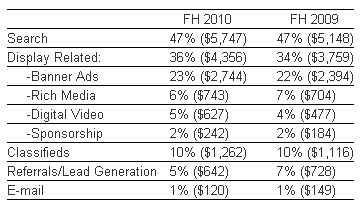 Digital video reached its highest half-year performance ever, up 31% from 2009. Search advertising accounted for the largest percentage of overall interactive spend at 47 %. It accounted for  $5.7 billion for the period, up 11.6% from 2009.

"Interactive advertising revenue is on a strong upward trajectory," adds Sherrill Mane, SVP, Industry Services, IAB. "Nearly all types of ad formats are showing positive movement and marketers across all advertising categories, most notably consumer packaged goods and pharmaceuticals, are increasing their investment in digital media."

This is on top of all of the organic search marketing and social media marketing companies are participating in.

OneRiot Moves Away From Realtime Search