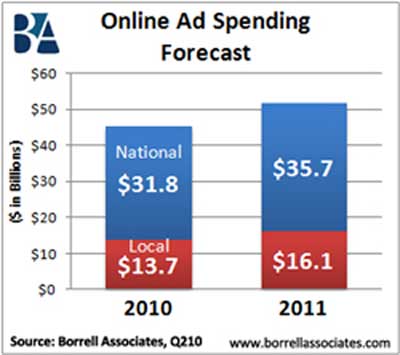 Borrell expects national paid search ad format will see a double-digit spending decline next year, moving down 11.3 percent. The drop will be caused by lower pricing and churn, but will be lessened by a local advertiser increase of more than 10 percent.

Email advertising will see moderately strong growth in 2011, up 9% to $16.0 billion for national and local. Growth in this format is almost all from national advertisers; only 3% is local.

Online promotions will top $24 billion next year, up 10% from this year’s totals. Much of this increase will be due to the rising use of online couponing, forecast to grow almost 14%, to $9.1 billion, in 2011.