Social networking use among Internet users ages 50 and older nearly doubled from 22 percent in April 2009 to 42 percent in May 2010, according to a new report from the Pew Internet & American Life Project. 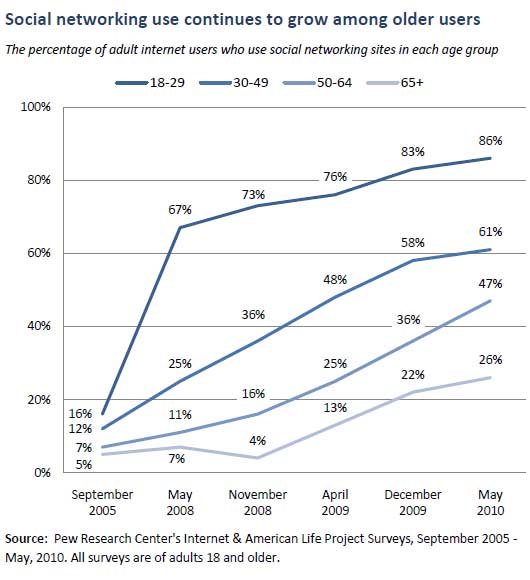 “Young adults continue to be the heaviest users of social media, but their growth pales in comparison with recent gains made by older users,” explains Mary Madden, Senior Research Specialist for the

“Email is still the primary way that older users maintain contact with friends, families and colleagues, but many older users now rely on social network platforms to help manage their daily communications.”

The use of social platforms like Twitter has also grown among those ages 50-64. One in ten Internet users 50 and older now say they user Twitter or another service to share updates about themselves or see updates about others.

“Social media has the potential to bridge generational gaps. There are few other spaces—online or offline—where tweens, teens, sandwich generation members, grandparents, friends and neighbors regularly intersect and communicate across the same network,” said Madden.

Google Draws New Round of Scrutiny Over ITA Deal