Facebook is far past the point where it’s an "ooh, look at that" moment every time an important person joins the site.  Another celebrity here or there hardly matters when it’s got more than 500 million users.  Still, it may be worth noting that an official British Monarchy Page has launched.

Posts on the Page actually date back to mid-September, but today marks the Page’s formal debut.  It’s gotten off to a great start, too, already collecting "likes" from 65,536 individuals. 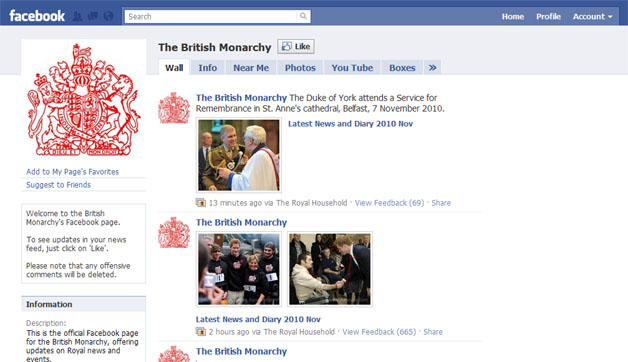 As for the Page’s intended purpose, the description states, "This is the official Facebook page for the British Monarchy, offering updates on Royal news and events."

The Facebook Page represents an impressive effort, and not an afterthought, though.  Photos, text updates, and links to the occasional video tie everything together and give a somewhat thorough picture of the royal household’s activities (posts often come within minutes of each other).

It should be interesting to see if Mark Zuckerberg acknowledges this development.

Amazon To Purchase Diapers.com For $545 Million