Now You Can Monetize Your Facebook Fans By Promoting Their Likes

Facebook has a new ad product that may be its most promising ad unit yet – the sponsored story. These ads are simply brand-related stories that users have already shared, but then paid for by the brand mentioned to appear in the ad space, as to attract more attention and engagement.

Will you be promoting your fans’ engagement with your brand? Let us know.

For example, if one of our Facebook fans likes an article that we posted or likes our Facebook page in general, we could pay Facebook to promote that, and that story from that fan would appear in the column to people who would have already seen it in the first place.

"So, my friend Joe goes, and he checks into Starbucks," explains Phil, a Facebook engineer. "That will appear on my news feed, and I may or may not see it, and what we’ve seen is that a lot of impressions do get lost because there’s so much content coming through. Starbucks can come in and say, ‘I want to promote check-ins to our locations’, so when I come to the site, I see a story that my friend checked into Starbucks. Now, I can click through. I can like the Starbucks page from that story, and when I like that page, it creates more organic content." 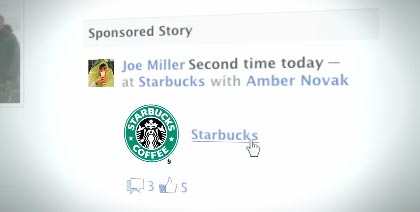 "When we make decisions about the products we want to buy or places we want to go, we’re basically looking for cues from our friends about what those things should be, and all us aren’t out there trying to market ourselves or try to influence people to go somewhere or do something, but the reality is when we make a decision, we’re looking for information, and we want that information to come from people we trust," says product manager Kent.

If you’re worried about how Facebook is using your content, the company says it will never show it to somebody who’s not your friend. The only people who will see it are the people who would’ve seen it in the first place via the newsfeed.

According to AdAge, there is no opting out of the feature (that could change if enough people complain about it). The publication also says, "The way that the product is today, a check-in post will show up in the ad feed exactly as the user wrote it. So if a user checks into Starbucks with a ‘I hate this place, but it’s the only coffee around’ then that’s exactly what the ‘ad’ turns out to  be." Advertisers can limit their sponsored stories to likes though, if they want.

According to recent estimates, Facebook took in about $1.86 billion in ad revenue in 2010. I expect that will increase significantly this year.

These ads could prove to be extremely effective, as they’re not really ads at all. They’re real stories from friends – at least that’s how they start out. Like Phil says, "It’s your friend saying, ‘Look, I did this, and I want to tell you about it.’"

Ning, a Facebook engineer, says that in the pilot cases, sponsored stories increased brand lift and the likeliness to recommend the product to another friend.

If nothing else, it’s a clear cut way to monetize Facebook fans. More in this video from Facebook.

Add Sponsored Stories to Facebook’s already powerful ad platform, targeting users based on their profile information, and Facebook is becoming a more and more attractive place to spend online advertising dollars. I still haven’t ruled out the possibility that they’ll eventually launch an AdSense-like network that will send targeted Facebook ads out across the web, but they’ve still given no indication that they’re going that direction. It still seems like an obvious choice though.

Do you think Sponsored Stories will be a hit? Tell us what you think.

Twitter Teams Up With the NFL For Super Bowl 45