The National Oceanic and Atmospheric Administration (NOAA) has launched a website with near-real-time information about the response to the Deepwater Horizon BP oil spill.

The site, GeoPlatform.gov features data on the oil spill’s path, fishery closed areas, wildlife and place-based Gulf Coast resources such as pinpointed locations of oiled shoreline and daily positions of research ships, into one customizable interactive map powered by Google. 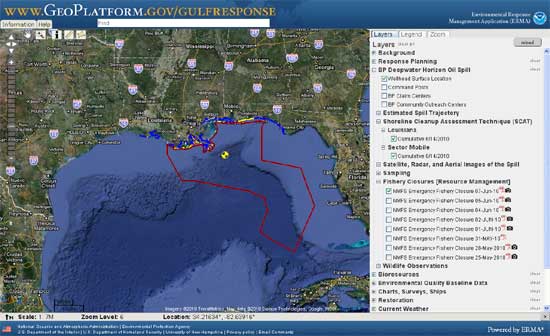 The launch of GeoPlatform.gov is aimed at providing communication and coordination among a variety of users, including federal, state and local responders to local community leaders and the public.

"This Web site provides users with an expansive, yet detailed geographic picture of what’s going on with the spill; Gulf Coast fisherman, recreational boaters, beach users and birders will be able to become more informed," said Jane Lubchenco, Ph.D., under secretary of commerce for oceans and atmosphere and NOAA administrator.

"It’s a common operational picture that allows the American people to see how their government is responding to the crisis."

GeoPlatform.gov was developed through a joint partnership between NOAA and the University of New Hampshire’s Coastal Response Research Center.