Newspaper advertising is the top source that consumers turn to for making shopping and purchasing decisions, according to a survey conducted for the Newspaper Association of America by Frank N. Magid Associates.

The study titled “How America Shops and Spends 2011,” found that 79 percent of adults said they “took action” as a result of newspaper advertising in the past month including clipping a coupon (54%), making a purchase (46%), visiting a website to learn more (37%), and trying something for the first time (20%). 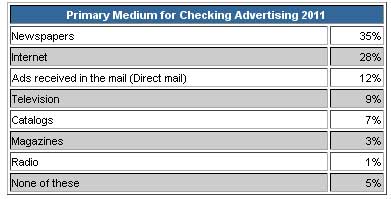 “This important new research reaffirms the power of newspaper advertising to engage consumers and drive them to take action,” said NAA President and CEO John Sturm.

“More than all other media, adults continue to turn to newspapers to inform shopping decisions that lead to purchases. They are an opt-in media in an opt-out world, making newspaper advertising an ideal and effective choice for advertisers who want to reach consumers ready to shop and spend.”

Advertising on local newspaper websites ranked second (behind only e-mailed store or product information) among online options for advertising sources, beating general interest websites, paid ads that appear on the right side of the search engines , ads on social network pages, and ads on mobile devices.

The study found that other media trailed behind newspapers as the main source for checking advertising. he closest competitor – the Internet – trailed newspapers by seven percentage points (35 percent vs. 28 percent) Direct mail received a 12 percent response, and television was cited by nine percent of respondents.

*More than half of all adults (52 percent) identify newspapers as the medium they use to help plan shopping or make purchase decisions.

*Nearly four-in-10 (38 percent) adults who identify themselves as newspaper “non-readers” recalled other forms of engagement in the past week, including checking sales in local stores, clipping coupons, comparing prices, checking movie or TV listings and classifieds.

Bad Wi-Fi Signal? Your House Could Be To Blame