There has been a lot of discussion about the fate of the online news industry lately, particularly since the New York Times announced that it will be going the paid content route next year. Another New York-based publication, Newsday, already charges for its online content. After three months of doing so, it has reportedly only managed to attract 35 subscribers.

Newsday.com is free for those who subscribe to Newsday (print) or ISP Optimum Online. Otherwise, you have to pay $5 a week ($260 a year).

According to the New York Observer, the publication revealed its 35-member subscription base in a newsroom-wide meeting last week, when a reporter asked how many people subscribed. 35 people at $5 a week for 12 weeks is $2,100. If they are all signed up for the year, that’s $9,100 so far. Cablevision purchased Newsday for $650 million in 2008. 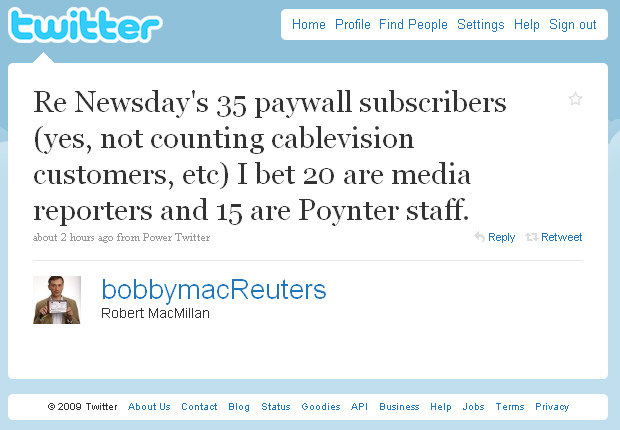 According to data from Compete, Newsday.com’s traffic has been taking a steady nosedive. From the three month period between September and December (the pay wall started in October), Compete has the site’s US unique monthly visitors plummet from just over two million to just over one million. It will be interesting to see if January’s numbers extend the trend at a similar pace.

Newsday.com promises that when you register for a subscription, you will gain access to:

– Breaking local news
– High school sports scores and stats
– ExploreLI – your online guide to fun on LI
– Latest HD quality videos and photos
– Customizable news and information that matters the most to you
– Exclusive newsday.com newsletters and text alerts
– Newsday deals and discounts

The question is, is this stuff worth paying for? Apparently for a few people it is, but based on the information presented by the Observer, it’s not looking good as a business model. One can only assume that the less traffic that comes in, the less advertisers will be attracted, and if the pay wall isn’t generating the money either, how can it work?

I don’t know about the deals and discounts, but is the local news offered so unique that it can’t be found elsewhere? High school sports scores?

To be fair, it hasn’t been an incredibly long time since Newsday’s pay wall was introduced, but how long will they give it to gain momentum before they give up on it? How long would you wait? Discuss here.

> Is the New York Times Jumping the Gun on Paid Content?

Has Google Begun Changing How it Indexes the Web?