Data collected by Hitwise shows the impact of the newly instated New York Times paywall, and it’s not great news for the venerable news outlet.  Overall visits have decreased between 5% and 15% per day.

As you probably remember, The New York Times rolled out a semi-permeable paywall on March 28th.  The paywall allows up to 20 pages views for readers who access the site through direct means.  After that, readers are prompted to pay for a subscription service.  The paywall also includes social media and search exceptions, allowing articles accessed via sites like Google and Facebook to not count towards the “20.”

Hitwise crunched the numbers and compared traffic for a 12 day period before the paywall with traffic 12 days after the paywall was erected.  Both total visits to the site and page views have dropped dramatically.  Below is the chart for percent change in total visits between the two 12-day periods.  Note the only increase is Saturday, April 9th which Hitwise suggests was “likely due to visitors seeking news around the potential government shutdown and ongoing budget discussions.” 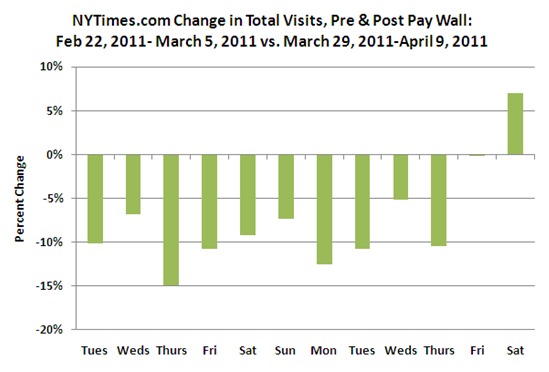 The paywall’s negative effect is even more prominent when looked at in terms of page views.  The same 12-day period shows negative changes of between 11% and 30%: 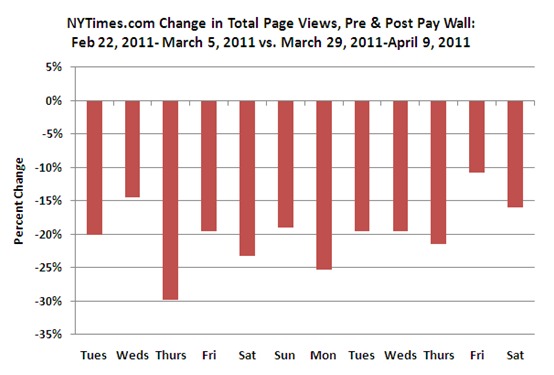 Hitwise also notes that the social media and search loophole discussed earlier hasn’t done much to increase traffic to the New York Times website from those sources:

“While using these sources could be a clever workaround for a reader hoping not to pay, to date there has not been a significant difference in the share of upstream traffic from both search and social networks to NYTimes.com before and after the launch of the paywall.”

Traditional journalism is struggling to compete with the rise of internet reporting.  Information is plentiful, and mostly free.  While these statistics aren’t a comprehensive comment on the success or failure of paywalls, they do suggest the New York Times’ system might not be optimal.  It will be interesting to see if they are simply slow out of the gates or whether it will become a much larger failure for the news organization.