New statistics regarding Twitter have been released, and there’s good and bad news for the site.  The good: it’s attracting lots of new users every month, and some of them become very devoted fans.  The bad: Twitter’s growth rate is declining, and a ton of people seem to establish an account and then never return.

Let’s just get the most important numbers out there.  Robert J. Moore wrote today that there were 75 million Twitter accounts at the end of 2009.  He also stated, "The monthly rate of new user accounts . . . is currently around 6.2 million new accounts per month (or 2-3 per second).  This is about 20% below July’s peak rate." 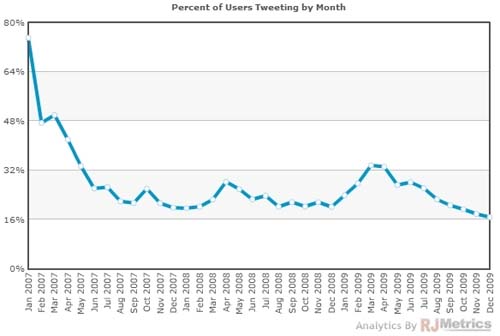 Those are scary problems if they continue to plague the site (or grow worse).  Twitter needs to either address the last two issues (perhaps via some "find a friend" and "invite a friend" features), or do something fast to increase its growth rate.

It’s probably too soon to predict the site’s demise, though, considering that its first developer conference is coming up and some interesting stuff may be announced.  Also, even with its problems, it’s a simple fact that many site owners would still kill to have Twitter’s stats.

Possible Outcomes Of The iPhone Becoming A Non-AT&T Exclusive