When it comes to ordering food at exotic restaurants, meeting foreign exchange students, or perhaps translating a non-subtitled line from a movie, iPhone owners are no longer at a serious disadvantage compared to their Android-using peers.  This afternoon, Google released the official Google Translate for iPhone app.

This represents a major upgrade from the basic Google Translate HTLM5 app that was launched in 2008.  A post on the Google Mobile Blog explained, "The new app accepts voice input for 15 languages, and – just like the web app – you can translate a word or phrase into one of more than 50 languages.  For voice input, just press the microphone icon next to the text box and say what you want to translate."

Then the post continued, "You can also listen to your translations spoken out loud in one of 23 different languages.  This feature uses the same new speech synthesizer voices as the desktop version of Google Translate we introduced last month." 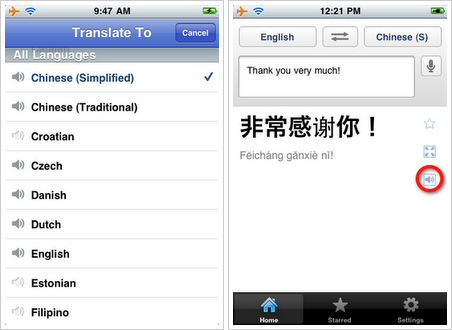 There’s even a full-screen option, as well, to make communication easier on the eyes if people speaking different languages wind up passing the iPhone back and forth.

The app’s only shortcoming compared to the Android version appears to be its lack of a "Conversation Mode."

It’s free to download and available here if you happen to own an iPhone and are interested.

Greplin Shows Promise In Areas of Search Where Google is Failing