What’s that buzzing you’re hearing? Are you surrounded by wasps? If not, it could be people reacting to Google’s newest logo; this time, for their Android 3.0 update, named “Honeycomb.”

Keeping with the look and feel of the original Android logo, while incorporating a theme that matches the Honeycomb name, the new logo is a mix between the current green guy and a blue-and-black bee, giving us this: 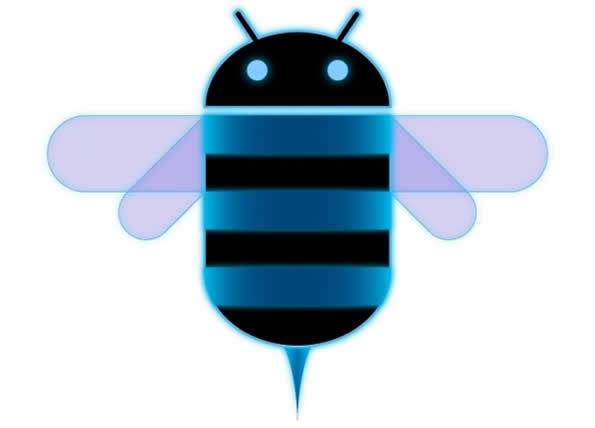 As you can see, the results are pretty impressive, provided going wild for new logos and graphics is important to you. Over at the Android Developers page, they have some details about the newest update, including some information about being the first Android OS to be developed with tablet PCs in mind.

Starting with Android 3.0, developers can break the Activities of their applications into subcomponents called Fragments, then combine them in a variety of ways to create a richer, more interactive experience. For example, an application can use a set of Fragments to create a true multipane UI, with the user being able to interact with each pane independently. Fragments can be added, removed, replaced, and animated inside an Activity dynamically, and they are modular and reusable across multiple Activities. Because they are modular, Fragments also offer an efficient way for developers to write applications that can run properly on both larger screen as well as smaller screen devices.

While the new logo is a neat combination, and considering it was developed for the Honeycomb update, what happens if the update is a failure?  Wouldn’t Google have to consider changing the name from “Honeycomb” to “Beeswax?”

That way, they can keep using the new logo even if the updated OS doesn’t impress Android users.  However, considering the open source nature of Android, users can just fool around with the source code until they’re satisfied with what they have.