Android’s relatively quick upgrade cycle is something that excites fans, as it leads to new and better versions being released on a regular basis.  But it’s also something that stirs up critics, since fragmentation results.  Now, for better or for worse, there are new stats on the use of different platform versions.

The "better" part: the new data shows that less of a split exists now than in the past, and the majority of Android device owners seem to be using one of the two latest versions.

The "worse": Android 1.5 and 1.6 are still hanging around, and Eclair’s actually got a lead on Froyo, which is less than desirable.

More specifically, Froyo is running on about 36.2 percent of Android devices, Eclair’s on 40.8 percent, Donut’s on 15.0 percent, and Cupcake’s on 7.9 percent.

You can see these stats in a more visual format below.  Google released the image today, noting, "The following pie chart . . . is based on the number of Android devices that have accessed Android Market within a 14-day period ending on [November 1, 2010]." 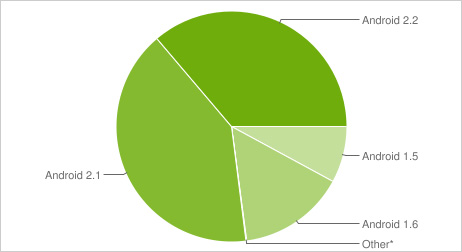 Of course, another version of Android (codenamed Gingerbread) is supposed to debut any time now, and it’s sure to shake up the situation and restart arguments about fragmentation.