It’s not news that Netflix is crushing its competition within the world of streaming video.  Almost a third of all paid streamed content in America is provided by Netflix.  It’s iron grip on the competition might become even stronger with the announced foray into the original content arena.

It’s also not news that Netflix is changing the way people watch movies.  And the rise of a major streaming service is of course going to cut into the market share of hard-copy options like DVDs and Blu-rays.  But new internal search data from Google paints a pretty bleak picture for Hollywood and their reliance on DVD sales as a major source of revenue.

BTIG Research analyzed a research note published by Google earlier this month and found that searches for Netflix are shooting through the roof.  On the other hand, DVD related queries like “New Releases DVD,” “Movies on DVD,” “DVD rentals” and just plain “DVD” are very low in volume – and declining.  So if you go by search, the DVD is on its way to the grave, and going there fast. 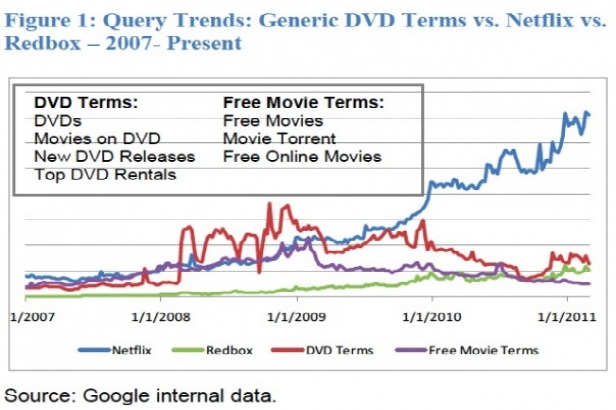 A couple of notes about the entire BTIG report, from All Things Digital:

From the looks of this, Hollywood is going to have to fully embrace the world of streaming video.  The most recent discussion of this is with Premium Video on Demand, the $30 a pop service where major studios are offering not-yet-on-DVD films to families for a hefty price.  The availability and affordability of streaming content has grown in the past couple of years, and movie-watchers have embraced the change.  It looks as though physical possession of films is not that important anymore, and if that trend continues the DVD is destined to quickly go the way of the CD.

One of the more interesting things about the above chart is the sharp decline in “Free Movie” terms that includes searches for torrents.  In no way do I think movie downloading in on the decline.  This decline in search probably just means that people aren’t searching for places to find torrents.  They already have sites that they trust, and they start from there when searching for a specific torrent file.

Google Offers - Is Groupon in Trouble?