At the Consumer Electronics Show (CES) in Las Vegas, Netflix announced agreements with five global consumer electronics companies, to introduce Netflix-ready devices later in the year. These companies are Funai, which distributes the Philips, Magnavox, Sylvania and Emerson brands in the United States, Panasonic, Sanyo, Sharp and Toshiba.

Each of these companies will introduce Blu-ray players or digital TVs that will stream Netflix movies and television shows for instant watching, much like existing devices already do: 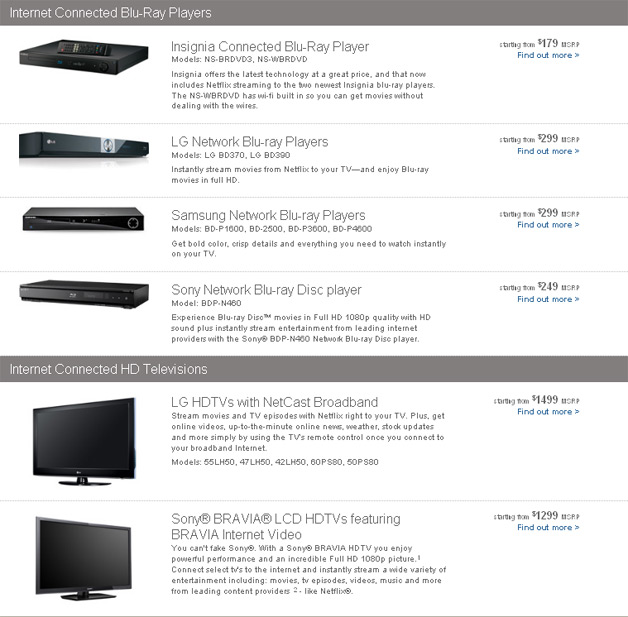 "Ever since Netflix began instantly streaming movies and TV episodes to personal computers in January 2007 we’ve said we want to be ubiquitous on whatever device gets the Internet to the TV," said Netflix co-founder and CEO Reed Hastings. "We’ve made incredible progress toward this goal over the last year and we’ve rapidly established Netflix as a must-have service for Internet connected consumer electronics devices. The important companies and brands we’ve announced today join a roster of world-class CE companies that have partnered with Netflix.

"We look forward to adding even more partners this year, and we expect instant streaming of movies from Netflix to be available on more than one hundred different partner products in 2010," said Mr. Hastings.

On a separate Netflix-related note, it was announced yesterday that Netflix will now have to wait 28 days after a DVD release to offer that DVD for rental to its customers, when it comes from Warner Bros. This is likely just the beginning of things to come in the industry, which will probably include similar moves from various studios and rental companies.

> Coming Attraction: Netflix on your PS3