Satisfaction with the top 100 e-retailers has increased from a decline this time last year, to an all-time high score of 78 points on a 100-point scale, according to new research from ForeSee Results.

The research found consumers are more satisfied with their online experiences than ever before. Nearly every individual retailer reached a score that matched or exceeded previous satisfaction levels.

"The state of the economy really forced e-retail to step up their game," said study author Larry Freed, president and CEO of ForeSee Results.

"Since so much of the financial downturn was out of their control, companies turned to those things they could improve, and now they are reaping the benefits. Customer satisfaction is not a byproduct of a healthy economy. Instead, a healthy economy is a consequence of satisfied customers." 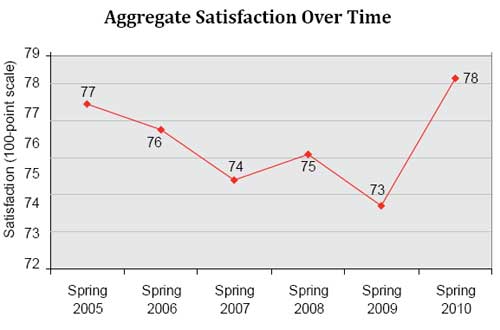 In 2009, only five websites scored more than 80 (generally considered the threshold for excellence), but in 2010, 28 websites score 80 or higher. Not a single e-retailer scored below 70 (usually the cut off for bottom performers), an unprecedented event in the research’s six-year history. Several companies made huge jumps in score, the most improved being MarketAmerica.com (+12 to 75), Etronics.com (+10 to 73) and Ambercrombie.com (+9 to 79).

"The impact of customer satisfaction on an e-retailer’s bottom line has never been clearer," said Kevin Ertell, Vice President of Retail Strategy at ForeSee Results.

"This research proves that customer satisfaction is still the number one driver of loyalty, positive word of mouth, and future purchasing intent. Despite a serious dip in 2009, e-retail has jumped back in line with the other industries we measure, an indication for many that the economy is finally on the way back."