There is a fundamental distinction between Netflix users and Hulu users, and it goes far beyond who has more allegiance to 30 Rock.

Netflix and Hulu users differ greatly in both how they stream their content and what content they are streaming.

The majority of Netflix videos are being enjoyed on people’s televisions. Whether that be through the Wii, Xbox360 and PS3 consoles or internet-enabled devices like Roku and Blu-Ray players, chances are good that if you’re streaming Netflix, you’re taking it in on a bigger screen. 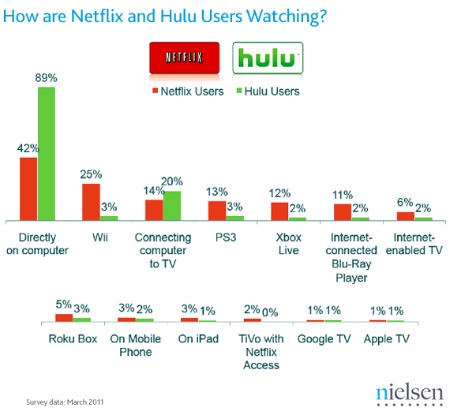 One of the most surprising figures to me is the Hulu/Xbox Live stat. Of the 12,000 people that Nielsen asked, only 2% stream Hulu via their Xbox360s? That’s only shocking to me because I remember how excited people were when Hulu announced it was coming to the Microsoft console.

Does this some something to do with the people? Probably not, as it most likely has more to do with the catalogs. The recent Netflix price hike outrage might cause a significant number of members to say goodbye to their subscriptions, but would they give their money to Hulu Plus instead? It sure seems that at least right now, the two services aren’t competing with each other for the same type of content and user.