Netflix said today it is working with major consumer electronics makers to develop  a Netflix-branded one-click buttons on remotes that operate Internet connected TVs, Blu-ray disc players and other devices.

Beginning this Spring, buttons that specify "Netflix" – including some featuring the red Netflix logo – are planned to be on remote controls that operate certain new Blu-ray disc players from a variety of companies including Best Buy’s in-house Dynex brand, Haier, Memorex, Panasonic, Samsung, Sharp, Sony, and Toshiba.  Sharp, Sony, and Toshiba also will place the Netflix one-click button on remote controls for select new Internet-connected TVs.  Remote controls for the Boxee, Iomega and Roku set-top boxes also will feature the Netflix one-click remote. 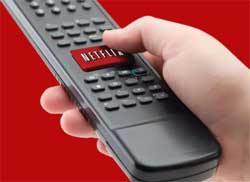 "For members who want even more convenience when instantly watching TV shows and movies streaming from Netflix, the answer is about to be right in their hands," said Netflix Chief Product Officer Neil Hunt.

"No more turning on the TV, going to a home screen and searching for the Netflix icon.  With the Netflix one-click remote, it’s simply a matter of pushing the Netflix button to instantly watch any of the vast selection of TV shows and movies available to stream from Netflix."

Netflix said there are now more than 250 Netflix ready devices on the market and it has more than 16 million members in the United States and Canada.