Nearly twenty percent (19.9%) of commercial, permissioned emails never reached consumers inboxes in the United States and Canada in the second half of 2009, according to a new report from Return Path.

Permissioned email reached only 80.1 percent of consumer inboxes in the United States and Canada during the second half of 2009, a .8 percent increase from the 79.3 percent inbox place in the first half of 2009. In the United States and Canada, 3.5 percent of those emails ended up in a junk or bulk emails folder and 16.3 percent were missing with no notification of non-delivery.

In Europe, 85.5 percent of emails reached consumers inboxes, 3.6 percent of emails were delivered to a junk or bulk folder, and 11 percent were missing. In the Asia Pacific region, inbox placement of emails was higher in the second half of 2009 with an 86.9 percent success rate. 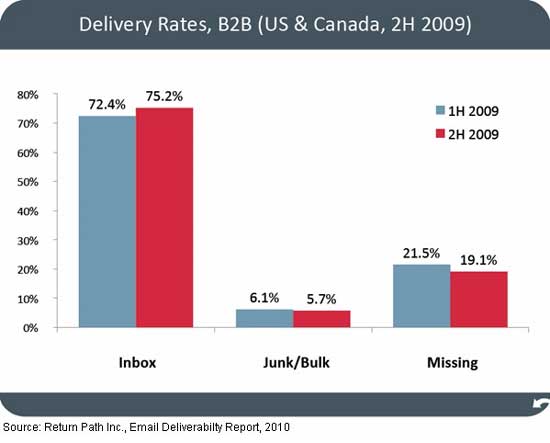 "We spent a lot of time in 2009 discussing how inbox placement rates affect ROI, and we’re going to continue talking about this issue in 2010. Many senders believe that their email campaigns are achieving a 95% to 98% delivery rate. However, as our latest Email Deliverability Benchmark Report clearly illustrates, senders still do not have the correct data to accurately determine true ROI," said George Bilbrey, President and Co-founder, Return Path.

"If senders and ESPs count only their hard bounces as emails that failed to reach consumers, they’re not getting an accurate metric as to how many emails actually made it into subscriber inboxes. Ultimately, only emails that reach a subscriber’s inbox can be opened, clicked and converted into a loyal and active customer. Remember, sent minus bounce does not equal delivered."

The top five ISPs for senders to reach consumer inboxes in the United States ranked in order of difficulty were BellSouth, Gmail, MSN, Hotmail, and Yahoo!.

The top five ISPs for senders to reach consumer inboxes in Canada were Primus.ca, Shaw, SaskTel, MTS, and Bell. Primus.ca which uses Postini as part of its email filtering system, failed to deliver 55% of emails that marketers sent to Primus.ca users which represents a 2% increase from the first half of 2009.

The top five ISPs for senders to reach consumer inboxes in the United Kingdom ranked in order of difficulty are Demon, BT Internet, AOL, Orange, and Yahoo!.

>Majority Of Consumers Want To Interact With Brands Online