The National Telecommunications and Information Administration (NTIA) has introduced a searchable nationwide map of broadband Internet availability along with the results of a new survey on broadband adoption.

Update: The National Broadband Map is having technical issues. 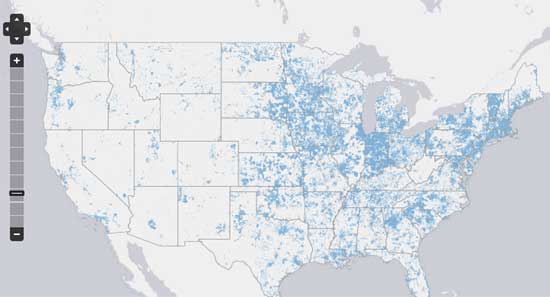 The website includes more than 25 million searchable records showing where broadband Internet service is available, the technology used to provide the service, the maximum advertised speeds of the service, and the names of the service providers.

Users can search by address to find the broadband providers and services available in the corresponding census block or road segment, view the data on a map, or use other interactive tools to compare broadband across various geographies, such as states, counties or congressional districts.

The map shows that between 5 – 10 percent of Americans lack access to broadband at speeds that support a basic set of applications, including downloading Web pages, photos and video, and using simple video conferencing. The FCC last July set a benchmark of 4 Mbps actual speed downstream and 1 Mbps upstream to support these applications.

“The National Broadband Map shows there are still too many people and community institutions lacking the level of broadband service needed to fully participate in the Internet economy,” said Assistant Secretary for Communications and Information and NTIA Administrator Lawrence E. Strickling.

“We are pleased to see the increase in broadband adoption last year, particularly in light of the difficult economic environment, but a digital divide remains.”