NASA To Hold Tweetup At The World Science Festival

NASA and the World Science Festival said today they are inviting Twitter followers to a behind-the-scenes Tweetup at 2 p.m. EDT on Saturday, June 5, in New York City.

The event will bring together 100 Twitter users with some of the world’s brightest scientific minds. 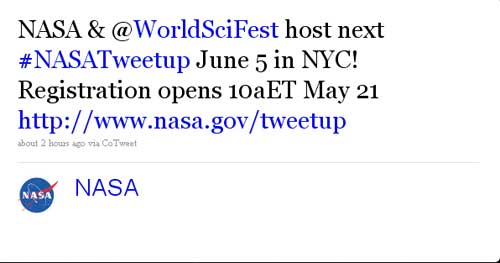 Registration is open from 10 a.m. EDT, Friday, May 21, to 10 a.m., Monday, May 24. NASA and the World Science Festival will randomly select 100 participants from Web registrants. Additional applicants will be placed on a waiting list.

The Tweetup is just one of 40 special programs scheduled during the third annual World Science Festival, which runs from June 2-6. The Tweetup also will include a social session for participants to mingle with fellow tweeps and the staff behind the tweets on @NASA and @WorldSciFest.

May 20, 2010
Recent Posts
Registration is disabled.