NASA is inviting its Twitter followers to a special Tweetup with astronaut T.J. Creamer at 3 p.m. EDT on Thursday, July 29.

While in space, Creamer set up the International Space Station’s live Internet connection. He posted updates about the mission to his Twitter account and sent the first live tweet from the orbiting outpost. 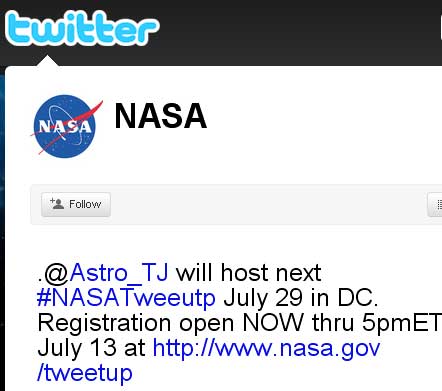 This NASA Tweetup is a chance to meet and speak with Creamer, the people behind NASA’s Twitter account, and other space-exploration-minded participants.

Registration for the event is open from now until 5 p.m. on Tuesday, July 13. NASA randomly will select 100 participants from web registrants. Additional applicants will be placed on a waiting list.

Creamer spent 161 days living aboard the station as part of the Expedition 22 and 23 crews. He launched aboard a Soyuz spacecraft in December 2009 and returned to Earth June 2, 2010.