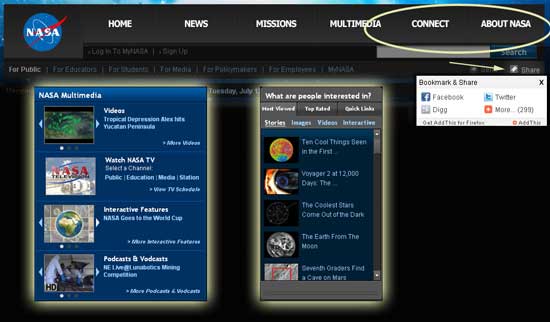 The new features on NASA.gov include:

*We added images to the ‘What are people interested in?’ box on the homepage.

*We changed the navigation on the homepage multimedia box so that the options are clearer within each panel of the box.

*We swapped the ‘Connect’ and ‘About NASA’ buttons in the top navigation bar to reduce confusion since we found several users intuitively saw ‘Connect’ and thought ‘Contact’ since the words are similar and that’s a more standard placement for contact information.

*We pared down the ‘Share’ options at the top of pages from a list of hundreds to four-options which then expand out to the full list.

* We tweaked the information we provide when you share our pages on Facebook so that it shows a image to illustrate each page and video.

NASA also said it plans on updating its Twitter box on the homepage to make it easier to know where tweets are coming from. The agency is adding more Facebook and Digg integrations so users can "Like" its pages without sharing them on social networks. NASA said it will announce the improvements once they go live.

MySpace In Ad Talks With Google, Yahoo And Microsoft