MySpace appears to be working on a new feature that could help give it a much-needed boost in consumer enthusiasm. From the sound of it, it’s almost like Digg meets the Facebook News feed (or Reddit meets Twitter, if you’d rather look at it that way).

Either way, it involves users voting content up and down, while giving them a way to tap into updates on topics of interest.

Marshall Kirkpatrick obtained a link to the experiment, which is apparently called "MySpace Everything." Little is known about the company’s intentions for the feature or even if it will actually become a real feature, but it seems like a reasonable idea for a popular site struggling to stay relevant. Kirkpatrick explains:

The way the feature appears to work is that a MySpace editorial team, along with algorithms and business partnerships with trusted 3rd party content sources, will curate a stream of photos, videos and highlighted quotes. MySpace users can vote those bits of content up or down, comment on them, click through to the destination site (after an annoying interstitial page) to see the full content or most importantly subscribe to news topics (like Britney Spears) and get future updates delivered into the same news stream that their friends’ updates appear in.

Those streams of friends updates have been looking awfully quiet lately, as more and more people bail for Facebook and Twitter. This looks like it could be a great part of a solution to that problem. Facebook has not done a good job of helping people use its news feed as a personalized stream of information about topics of interest to them. Consumers do like to consume, after all, and celebrity news will probably always be hot. 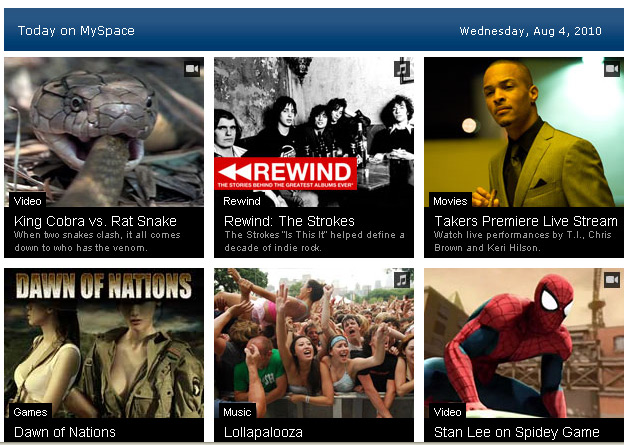 Trying to look at it myself, I’m greeted with a message that says, "The function that you are currently trying to use is disabled and will be back shortly." Kirkpatrick has a screenshot.