MusOpen Uses Diaspora Model to Set Classical Music Rights Free
You may have heard about Diaspora, a Kickstarter project that aims to be an open replacement for Facebook users that don’t like Facebook’s dealings with privacy. There is another interesting Kickstarter project called MusOpen, which aims to buy and release rights to a large amount of music, or in other words, open source it.

A volunteer with the project named Ben Givens reached out to WebProNews with some information about it. He says they’re close to completing it, but they’re still looking for feedback.

What MusOpen does is hire orchestras to record digital performances of symphonies by composers like Beethoven, Brahms, Sibelius, and Tchaikovsky. This music is in the public domain, but as the EFF points out, many modern arrangements and recording of them are copyrighted.

"That means that even after purchasing a CD or collection of MP3s of this music, you may not be able to freely exercise all the rights you’d associate with works in the public domain, like sharing the music using a peer-to-peer network or using the music in a film project," says the EFF.

That’s where these unique performances come in.

"The process depends somewhat on the amount raised," Ben tells us. "Assuming we get near our goal…we will create a voting system where every donor submits and votes on music. The winning ideas will determine the type of ensemble and amount of music. If the donors want a set of symphonies, we will speak to well known orchestras, probably in Europe to save money, and record it there. Otherwise we may mix an orchestra and smaller ensembles." 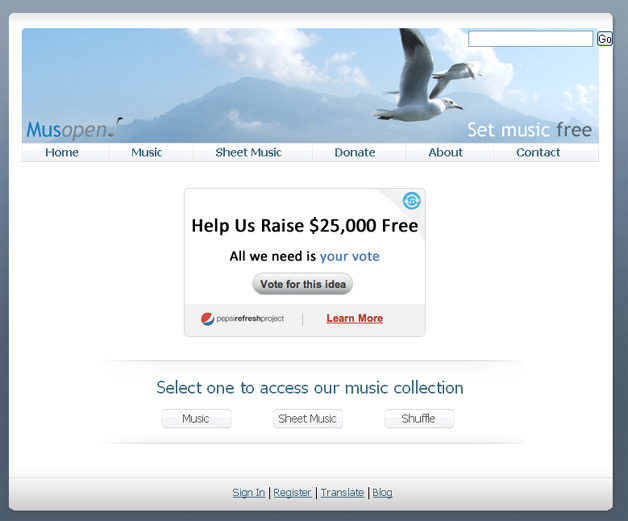 "Distributing the music will take place primarily on Musopen.org or through our twitter account," he says. "We have partnerships with the OLPC project and Wikipedia so we’ll likely add music to those as well."

"I’m volunteering for Musopen to help spread the word about this project specifically as I feel very strongly in its potential," Ben says. "There are no full time people working on it, the entire group consists of dedicated volunteers who have day jobs."

MusOpen was founded by Aaron Dunn, who has a team of advisers and a music editor. There are also volunteers like Ben who work on the site and spread the word about it.