It’s become clear that the television industry is at the beginning of a revolution as connected TVs and devices that bring the web to TV are really starting to hit mainstream interest. There are plenty of reasons to speculate that the industry will go through a similar pattern as we’ve seen with print and music. With so many more options available, people will look more and more beyond what the major networks are offering, and what the cable/satellite providers are providing.

The topic of the closing keynote at BlogWorld today was "The Future of Web Videos". One audience member asked the question that was surely on most of the minds in the room: will broadcast media be disrupted like the music industry was disrupted by Napster? 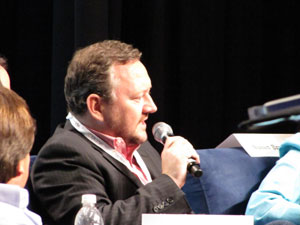 "I don’t think the Napsterization will happen to television," said MTV’s Digital Head, Dermot McCormack. He said he doesn’t think it’s going to be disruptive, adding that "smart companies will adapt like they always do."

"We’re smack in the middle of a transition period," he said.

It’s clear that the emerging technology is very much on the minds of professional video content creators though. McCormack is excited about mobile and tablets. The whole panel, which also consisted of Revision 3 CEO Jim Louderback and Funny or Die CEO Dick Glover seemed to agree that focusing on an app strategy across as many devices as possible should be a high priority.

Sony is apparently showing off their new Google TV model in the Expo hall. We’re going to have to swing by to give it a test drive.