The Chrome and Internet Explorer teams can talk all they want about supposed advances in speed, compatibility, and/or advanced features.  Right now, Mozilla’s software has an edge, as the organization’s using two red panda cubs to promote Firefox 4.

A post on the Mozilla Blog explained, "On June 14, 2010, two female firefox (a.k.a red panda) cubs were born at the Knoxville Zoo in Tennessee, and as of today, they’ve officially joined the Mozilla community.  To meet our newest (and cutest) Mozillians, visit www.firefoxlive.org.  For the next few months you’ll be able to watch these baby firefoxes play, live and grow via a 24 hour live video stream." 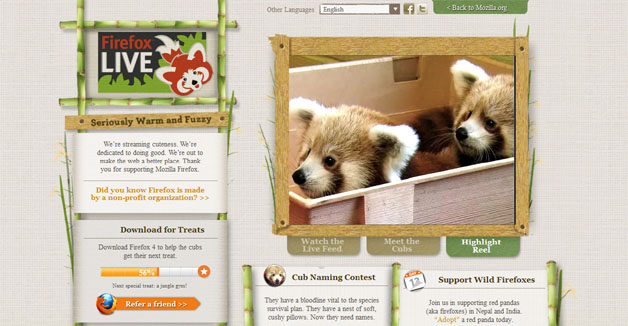 Then here’s where the user interaction starts to come in.  The post added, "You can also help us name the cubs!  Right now they go by the rather utilitarian names ‘cub #1’ and ‘cub #2,’ but you can add your suggestions for what they should be called on the site."

Plus, every download of the Firefox 4 beta puts the cubs a little closer to receiving a jungle gym as a treat, which should be a serious incentive for everyone to give the software a try.  Indeed, at least until Google or Microsoft adopts some puppies (or a slow loris), this writer is going to have to cheer for Mozilla in the browser war.

Have fun watching the firefox cubs for as long as the live stream lasts.

What if Facebook Goes Search While Google Struggles to Go Social?