There will soon be a new general (or even supreme commander) in the browser war.  Mozilla announced today that Gary Kovacs, who’s currently employed by SAP, will assume the title of "Mozilla CEO" starting November 8th.

Kovacs has an impressive resume.  Aside from SAP, he’s worked at Sybase, Adobe, Macromedia, Zi Corporation, and IBM, meaning he’s familiar with lots of tech and the inner workings of companies large and small. 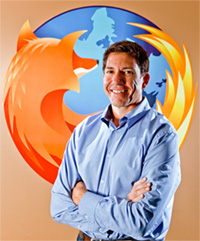 What’s more, Kovacs has the support of both John Lilly (Mozilla’s current CEO, who announced in May that he’d be resigning) and Mitchell Baker (Mozilla’s CEO before Lilly and longstanding chairperson).

Lilly wrote in a blog post, "[Kovacs] understands that Mozilla is a unique organization, with unusual strengths and weaknesses, and really embraces that difference.  But he’s also ready and able to help us do more with what we’ve built, and deliver even more towards Mozilla’s mission of making the Web more participatory and more open."

Mitchell agreed on a separate blog, "A number of people were involved in the search process.  We talked to a lot of people, and Gary stands out for the way he bridges these skill sets.  He melds the fundamentals of a good executive with a powerful understanding that Mozilla’s non-profit, public benefit mission drives everything we do . . ."

For the record, no one representing Chrome or IE seems to have responded yet.