Mozilla Introduces “Do Not Track”, Hopes to Make It Industry Standard

Mozilla has proposed a "do not track" browser feature, which would allow Firefox users to opt out of any third-party ad-based tracking. Such a feature would work by transmitting a Do Not Track HTTP header with each click or page view in the browser.

The Do Not Track header builds on the work the advertising networks have done to date without the cookie-based systems they make available to people online. The advantages to the header technique are that it is less complex and simple to locate and use, it is more persistent than cookie-based solutions, and it doesn’t rely on user’s finding and loading lists of ad networks and advertisers to work. We’re not the only ones who think this approach makes sense. The FTC calls for a “more uniform and comprehensive consumer choice mechanism for online behavioral advertising. In addition, the HTTP header technique has been proposed before (see the good work by donottrack.us and the UBAO add-on).

The challenge with adding this to the header is that it requires both browsers and sites to implement it to be fully effective. Mozilla recognizes the chicken and egg problem and we are taking the step of proposing that this feature be considered for upcoming releases of Firefox. 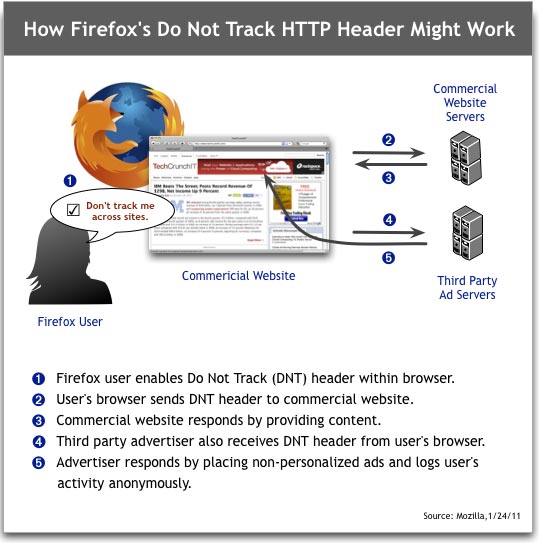 A couple weeks ago, Mozilla made the latest Firefox Beta available for4 testing, as it works toward the final release of Firefox 4.

It’s worth noting, as Fowler does, that the header-based Do Not Track mechanism will only work if both browsers and sites implement it.

The feature is only in proposal mode at this point, and will be the subject of discussion among the Mozilla community. Mozilla also aims to get more of the tech and advertising communities involved, and make the header an industry standard.