It’s not often I get the opportunity to write movie reviews for WebProNews, because it’s not often that major motion pictures are released about subjects within our general scope of coverage. I had the opportunity to attend a screening of The Social Network last night, so it seems appropriate that I offer my thoughts about the film here.

Do you plan to see The Social Network? Let us know.

Interestingly, the theater had tighter security than some airports I’ve been to – no phones allowed. We’re talking metal detectors, searches, and multiple guards.

I’m not going to get into all the fiction vs. non-fiction stuff too much. Anybody who has read about the founding of Facebook has probably formed their own opinions, while few can really say with any certainty how it all went down. There are multiple books about it. There are countless articles about it, covering it from numerous angles.

Facebook has dismissed the movie as fiction. Aaron Greenspan, who settled with Facebook over a dispute last year (and wrote one of the books) calls it non-non-fiction. I’m going to try to look at this simply as a movie goer and someone who has read The Accidental Billionaires, the book on which the movie is based. Any references I make to people involved in the story will be based upon The Social Network’s portrayal of them – their "characters" if you will – not necessarily their real-life counterparts. How close they are to one another is up for anyone to form an opinion about.

The film did a pretty good job of capturing the various emotions of the story itself (as did the book). There are quite a few laughs throughout. You can feel the betrayal and the toll it takes on those betrayed (with perhaps the exception of one character, which was accompanied by more detail in the book – I won’t name names, to avoid spoilers for those unfamiliar with the story). For some the betrayal comes off as heartbreaking, while for others it comes off as humorous. 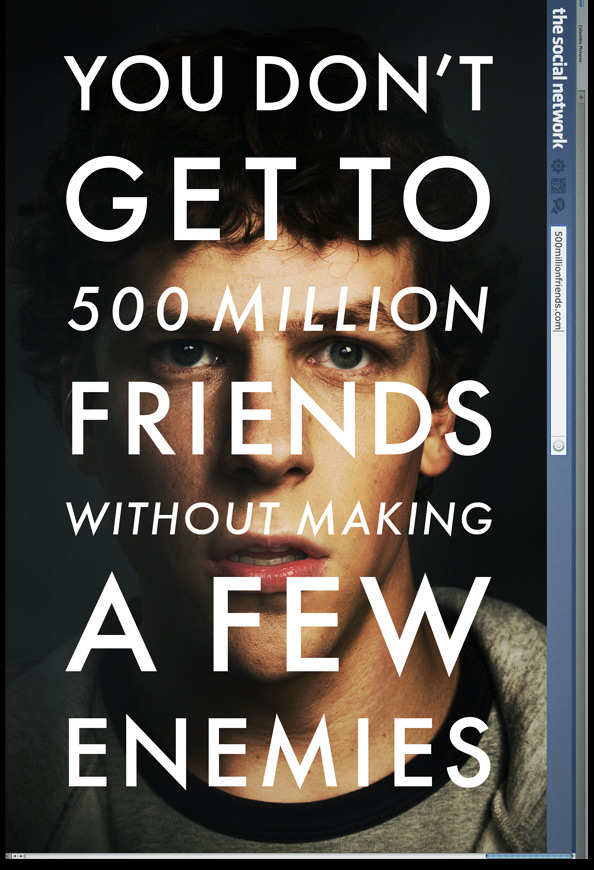 Trent Reznor’s score was adequate. Those familiar with Nine Inch Nails’ catalog will recognize the majority of the score as his (save for things like a rendition of "In the Hall of the Mountain King"). The score does set an interesting tone for the story that the book is unable to accomplish, simply as a result of the medium.

The film is not director David Fincher’s finest work (I’m still partial to Se7en, Fight Club, and The Game), but it’s certainly on par with, if not above titles like Panic Room, Zodiac, and The Curious case of Benjamin Button, strictly in terms of entertainment value (we’ll leave Alien 3 out of this).

Screenwriter Aaron Sorkin did a pretty good job of bringing the book to the screen, though there are some things left out. This is pretty standard for any book-to-film project though, so I can’t take too many points away for that. Trimming kept the film at a good  two-hour runtime (approximately).

A lot of the talk about this movie has been about its portrayal of Mark Zuckerberg, and how it will affect people’s opinions of him and the company. While clearly, the company isn’t thrilled about it, I don’t think perception will be as bad as they might think. Much of the audience seemed to laugh along with Zuckerberg through the majority of the film, and while some may have found numerous actions he took coldblooded, I think for the most part, much of the audience empathized with him, at least to some extent. That’s in the storytelling. The characters. Real life? You tell me.

Have you seen The Social Network? Do you plan to? Tell us what you think about it.