The Most Used iPhone Passcodes Are Depressingly Simple

In my mind, there are only three good reasons to use a passcode lock on your smartphone. The first is obviously security – you don’t want your dumb friends peeking at your private texts. The second is to prevent butt dialing or any other unknown activities that could stem from accidentally unlocking your phone in a traditional way. And lastly, passcodes make it harder to use your phone while drinking, thus reducing your latest Facebook embarrassment.

But if your reason was mainly security, wouldn’t you want to create a 4-digit PIN that wasn’t unbearably easy to guess? Apparently not, according to data posted on app developer Daniel Amitay’s blog today.

One of Amitay’s iOS apps is called “Big Brother Camera Security” Basically, the application will snap a picture of whoever is trying to use your phone without your consent. If they get the code wrong, snap! You have a picture of who was trying to access your device. You can also set it to sound an alarm.

For an app whose sole purpose is security, the top password is 1234. The second most common passcode was 0000. And the bronze goes to 2580, which as you probably know is simply a straight line down the middle of the keypad. 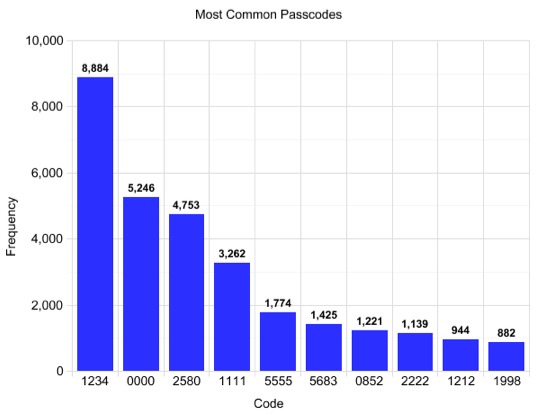 Apparently, people also love to use years as their passcodes. Whether they coincide with dates of birth, graduations, or anniversaries, 1990-2000 were in the top 50 most used passcodes and 1980-1989 were all in the top 100. One is the most common digit for the first spot in the code, while zero is the most common in the last spot.

So, guys, you’ve gotta step up your password game. I know you don’t want to make them so complicated that you forget them yourselves, but there is a happy medium between digits with no significance and 1111. And with these statistics in hand it is very likely that I could break into your phone with minimal effort.

Formulaic passwords are never a good idea, yet 15% of all passcode sets were represented by only 10 different passcodes (out of a possible 10,000). The implication? A thief (or just a prankster) could safely try 10 different passcodes on your iPhone without initiating the data wipe. With a 15% success rate, about 1 in 7 iPhones would easily unlock–even more if the intruder knows the users’ years of birth, relationship status, etc.

So next time you want to check out your boyfriend/girlfriend’s texts from last night, try a couple of these simple combinations. There’s a really good chance that one of them will work.