More Than Just a Redesign Going on with Facebook This Week

It’s been a pretty big week for Facebook. Not only is there a lot of talk about Facebook’s potential for becoming the top news source on the web, but the company celebrated its sixth birthday, is passing the 400 million user mark, and began rolling out some new design changes. In addition, the company is said to be rewriting its messaging feature and preparing to launch a webmail product, but first things first.

The Birthday and 400 Million Users

Facebook CEO Mark Zuckerberg discussed it in a blog post last night. "Today we’re celebrating our sixth birthday, and this week there will be 400 million people on Facebook. Just one year ago we served less than half as many people, and thanks to you we’ve made great progress over the last year towards making the world more open and connected."

"Facebook began six years ago today as a product that my roommates and I built to help people around us connect easily, share information and understand one another better." he added. "We hoped Facebook would improve people’s lives in important ways. So it’s rewarding to see that as Facebook has grown, people around the world are using the service to share information about events big and small and to stay connected to everyone they care about."

Facebook hosted a celebration and announced some releases at the Facebook headquarters last night. This was followed by a hackathon where Facebook staff stayed up all night coding and building new ideas for products.

Do you like the direction Facebook’s gone in for the past six years? Let us know.

Facebook announced some new changes to the design of its homepage. Users can find their newest notifications, requests, and messages in the top menu. When a user receives a notification, they will see a red bubble appear in the left-hand corner by the search bar. When the icon is clicked, a drop-down menu appears with the most recent notifications. The Home/Profile links are in the top-right corner with the Account menu, which includes privacy settings and the log out link.

The menu on the left-hand side of the screen has been completely reworked. "The left menu has been organized to make it easier for you to communicate with and discover content from your friends. You can now access your messages and other core features all in one place, to the left of your News Feed," says Facebook’s Jing Chen. "With the Photos dashboard you can browse recent photos of your friends, and the Events dashboard lists your upcoming events along with events your friends are attending. The Friends dashboard will help you find friends, see which of your friends have recently updated their profiles and filter your News Feed by Friend Lists you may have already created." 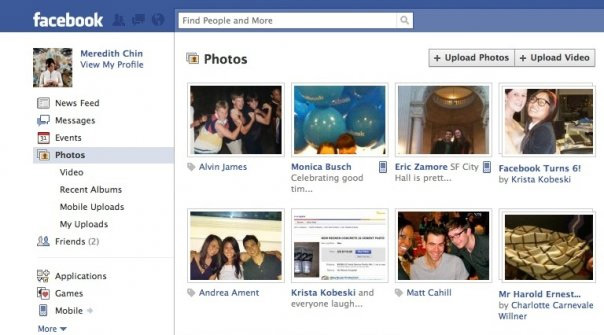 Chat has also been made more prominent with a list of online friends displayed on the left. The new apps and games dashboards, which have been discussed lately, can be accessed from the menu as well. The dashboards feature personalized updates from the apps, and they have launched with new privacy settings.

The changes are still rolling out, so it’s possible that you do not have them yet, but you will soon enough.

What do you think about Facebook’s design changes? Good Move or bad? Tell us what you think.

Michael Arrington is reporting that a "source with knowledge of the product" says Facebook is launching a webmail product. If MySpace can do it, surely Facebook can too. It’s being referred to right now as "Project Titan", although the name will likely change.

Facebook’s messages as they stand right now, lend to email notifications. When you check your email, you find that someone has sent you a message on Facebook. If Facebook gets you using its own email service, it’s cutting out the middle man, and that means…you guessed it – more time spent on Facebook.

Would you use Facebook for email if they offered a full webmail product? Tell us why or why not.

I’ve already written on this topic this week, but basically, the more time people spend on Facebook, the more convenient they may find it to simply get their news feeds there. If Facebook enters the email game, that’s only going to get people using Facebook that much more, and even open up yet another way for them to get their news on Facebook, through email newsletters and news alerts.

Update: Microsoft has announced some changes to its partnership with Facebook. Facebook will now be taking over its own display advertising, and will get a more feature-rich version of Bing search for its web search.