More than half (58%) of Americans conduct online research about the products and services they are considering purchasing, according to a new report from the Pew Internet & American Life Project.

That is an increase from 49 percent who said they did online research for a product or service in 2004.  The number of those who do research about products on an average day has increased from 15 of Americans in September 2007 to 21 percent in September 2010.  From February 2004, the number of adults conducting research on any given day has more than doubled, up from 9%. 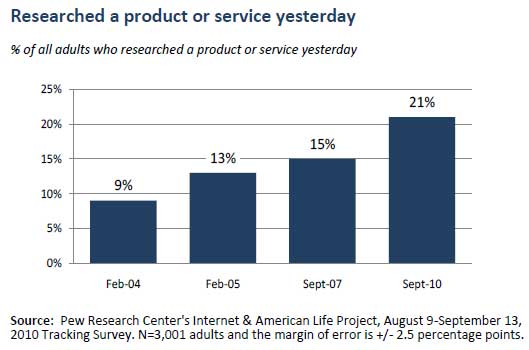 Additionally, 24% of American adults say they have posted comments or reviews online about the product or services they buy, indicating a willingness to share their opinions about products and the buying experience with others.

“Many Americans begin their purchasing experience by doing online research to compare prices, quality, and the reviews of other shoppers,” said Jim Jansen, Senior Fellow at the Pew Research Center’s Internet & American Life Project and author of a new report about online product research.

“Even if they end up making their purchase in a store, they start their fact-finding and decision-making on the internet.”

Other highlights from Pew include:

*The percentage making travel reservations or bought travel services such as airline tickets, hotel rooms, or rental cars rose from 22% in May 2000 to 52% in the Project’s May 2010 survey.

*Product and service information sharing coincides with increasing use of social networking sites. 46% of Americans reporting the use of internet sites such as Facebook or LinkedIn, up from 5% in February 2005.

“E-commerce is now a 360-degree experience for shoppers,” said Jansen. “It begins with research that in turn leads to purchases that then trigger commentary and reviews by shoppers. Every part of the online experience seems to have become second nature to internet veterans.”