More people are increasingly using their smartphones for local search, social networking and gaming, according to a new survey from Compete.

"With the increasing popularity of local search, retailers should ensure their sites are optimized for mobile browsers," said Danielle Nohe, director, technology and entertainment for Compete.

"Making it easy for consumers to discover businesses via their devices opens local companies up to a whole new customer demographic, and savvy businesses should make sure they’re maximizing this opportunity."

Consumers are increasingly accessing social networking sites via their mobile devices. According to Compete’s findings, 33 percent of smartphone Twitter users primarily send tweets via their smartphones, and 33 percent of these consumers prefer to read tweets on their phone. Of those accessing Facebook from their smartphone, consumers are increasingly using the device to read news feeds (66 percent), post status updates (60 percent), read/reply to private messages (59 percent) and post photos (44 percent). 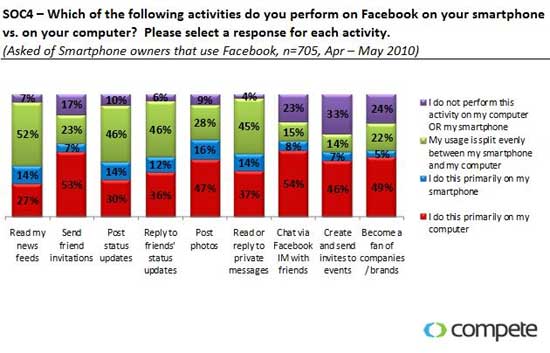 "Given the increasing popularity of Facebook, Twitter and other social sites, it follows that users are eager to access these outlets on their phones," said Nohe.

"Based on our findings, I recommend marketers start thinking about new ways to maximize consumers’ use of smartphones on social sites, as mobile adoption will likely only increase with time."

"It’s evident that iPhone owners have embraced mobile gaming," commented Nohe. "Developers should turn their attention to targeting other smartphone users in an effort to even out the discrepancies in mobile gaming adoption."